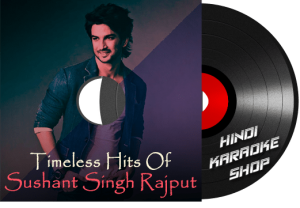 Rajput made his film debut in the buddy drama Kai Po Che! (2013), for which he received a nomination for the Filmfare Award for Best Male Debut

Sushant Singh will always be in our hearts. HKS presents a bundle of his songs in the form of Karaoke tracks

The bundle contains 20 most popular tracks.

If you buy these tracks separately, it would cost $121.8 in total but if you will purchase a bundle of 20 karaoke tracks together, it would cost just $60.9, which means a flat discount of 50%!

The bundle contains the following karaoke:

Click Below to listen to the original song on which the karaoke is based:

Click below to listen to the sample of the karaoke track: